Have a question, suggestion, or comment about Aleph One's features and functionality (Lua, MML, the engine itself, etc)? Post such topics here.
Post Reply
13 posts • Page 1 of 1

Hopefully this won’t put too much more load on the meat server. Between the convenience of mobile, and the meatspy bot, I expect we can get even more people joining online games.

It's been seven years, you would think the guy has made back his developer license fees tenfold by now. I would really like to see those in-app purchases go away.
Top

Fortunately it’s just a donate button now... But yeah, I was originally opposed to that too - If only because StoreKit integration just complicates things. I changed my mind though when I saw that the MoltenGL license was going to cost $1500 annually.
Top

All the more reason to switch to Vulkan

and I would’ve done it, too... except that Vulkan is the graphics API equivalent of the ALS Challenge. Sure, it’s unifying efforts to solve an important problem, but it’s about as fun as taking an ice bucket to the face.
Top

The port is not using MoltenGL now is it!? ES still works on iPhones for now.
Top

Not yet, but it’s on the wish list. The ES2/3 renderer (I’m trying to keep them interchangeable) is about 90% done. When it’s ready, I will probably just release it as-is. If by some miracle we can actually include MoltenGL for the project, it will bring down power draw and open up some of the more advanced effects to a broader range of devices (not to mention provide some insurance should OpenGL disappear in a future iOS release).
Top 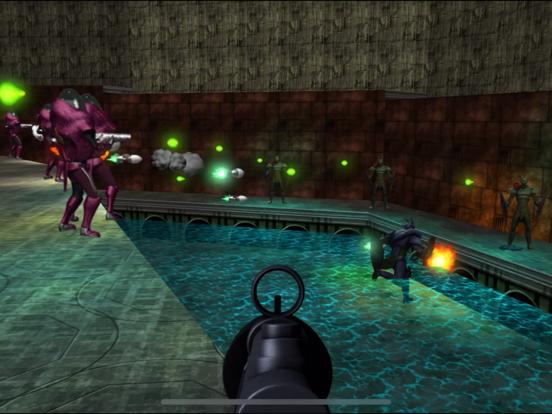 Just do that with the XBLA HUD, optionally with the map icon being the new version's minimap one unchanged and it should be fine.
Top

Where were you during the beta test?

Now, I do plan to add a few extra buttons in an upcoming revision. Other people have also mentioned the lack of escape key, and I will probably put in some sort of alternate trigger buttons, too.
Top

Thank you for working on this, it made my day! Is controller support in the works? Thanks!
Top

A few other people have asked about controller support, so it’s on the to-do list. I will probably need to buy one myself in order to develop the feature - I don’t personally know anyone who has a mobile controller.

Hope you are having fun!
Top

Thanks for updating the iOS versions! Any chance for Android versions? Would love to play these on my Nvidia Shield TV

People ask this pretty often... I think an Android version would be great, but I’m not in a position to start a project like that right now. However, I would contribute if someone else were to take the initiative on it.
Top
Post Reply
13 posts • Page 1 of 1